Leicester Morris men, like the majority of Morris sides dancing today are ‘revival’ clubs, and base what we perform on the materials collected by people like Cecil Sharp at the end of the 19th and early 20th Centuries.

Morris Dancing as we know it today owes itself to a series of coincidences. On Boxing Day 1899, Cecil Sharp, a London teacher and musician, came across a revival team from Headington Quarry, Oxford, performing out of season to raise some extra cash. He so enjoyed the dancing and tunes that he decided to document both the music and the steps.

This was the first time that Morris dancing had actually been recorded! Traditionally in the Morris all the dancing steps, the movements and music were passed down from father to son within each village or Morris side. Sharp’s interest in the English traditional dance lay dormant until 1905.  Following an article published in “The Morning Post”, he was asked by Mary Neal to teach some English folk songs to the girls and young women of her Esperance Club. The songs were such a success that she asked Sharp if there were any dances that went with the music. This reminded him of his encounter with Headington six years earlier.  His subsequent collection and teaching of dances from the most fragmentary information inspired others to do likewise  is acknowledged by many as the salvation of Morris Dancing from obscurity and probable extinction. 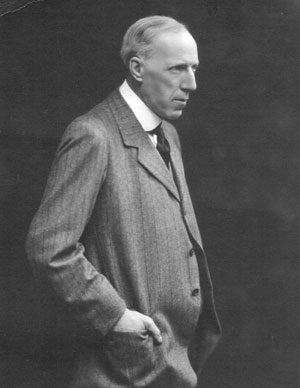 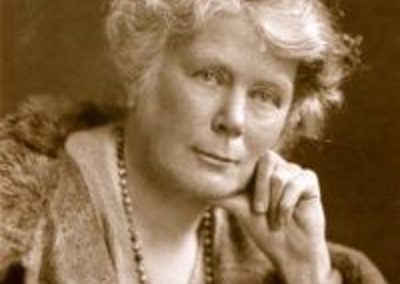 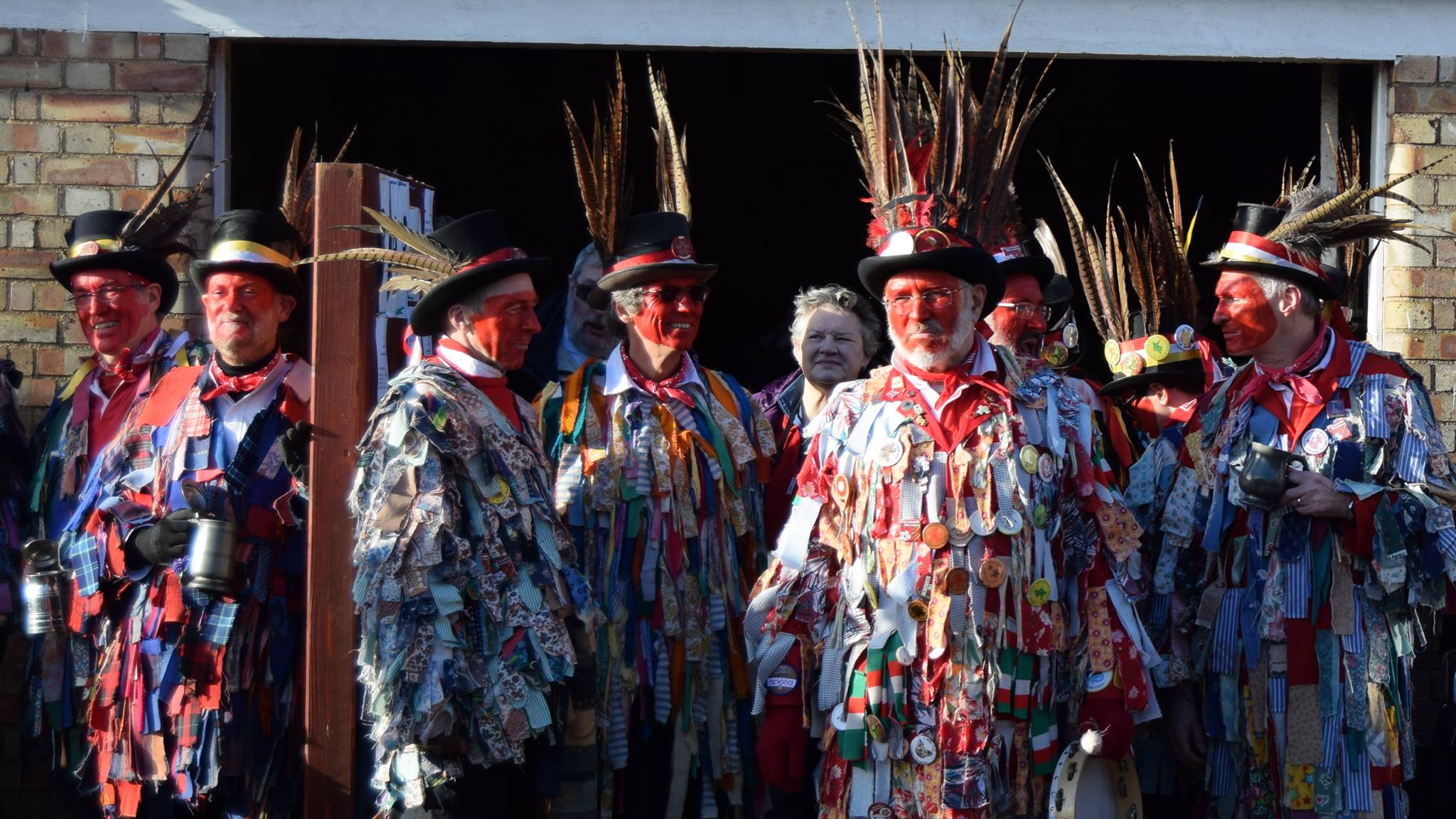 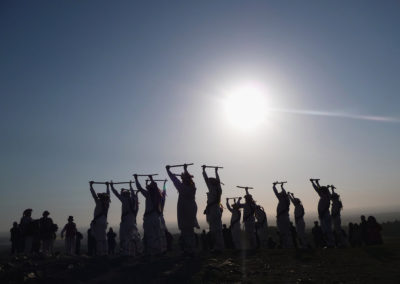 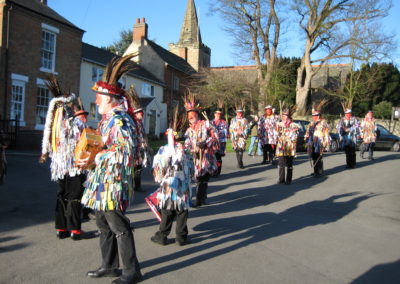 Nobody actually knows when the Morris was first seen in Leicestershire! People always take their customs for granted and centuries ago why would anyone bother to write anything down about their local Morris dancers?  We do know that in Shakespeare’s day the Morris was certainly an accepted part of life as he mentions it in one of his plays. The earliest written reference to Morris locally is in the Court Records of 1599. A group of men were hauled up before Leicester magistrates for dancing in the wrong place at the wrong time – Whitsun, as it happens – and were punished for their sins. They clearly did not learn the lesson and the same thing happened again in 1603, and they were duly summoned to appear once more.

The Morris then dropped out of sight locally for quite a while, and the next recorded mention is towards the end of the 19th-century, when dances with sticks were seen in Market Bosworth and other parts of West Leicestershire.  In the 1920s a side of dancers was performing Cotswold Morris in Leicestershire but the present Leicester Morris Men re formed in 1953, and they initially met just to learn the dances, with an occasional demonstration. In 1957 Steve George organised the first summer season of “dancing out”, and the side has never looked back. 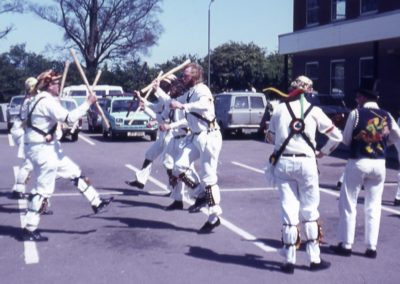 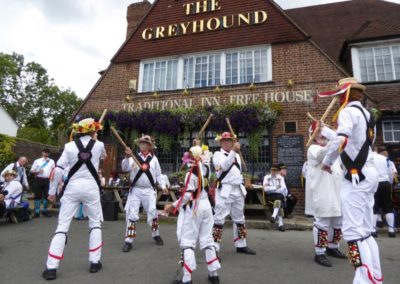 LMM at The Greyhound

LMM at The Greyhound

Nice hat for a Professor 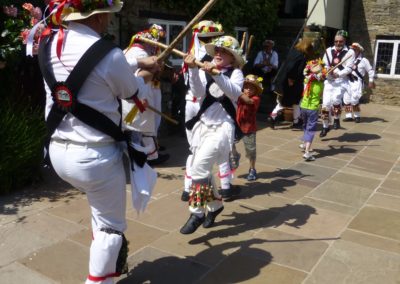 LMM invole the kids in Forest of Dean 2016 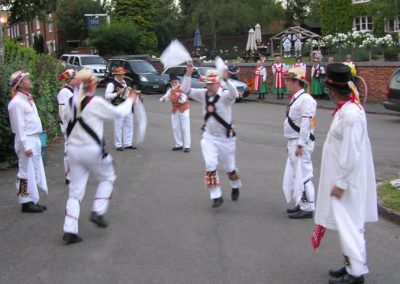 LMM on tour with Jerusalem Jammers 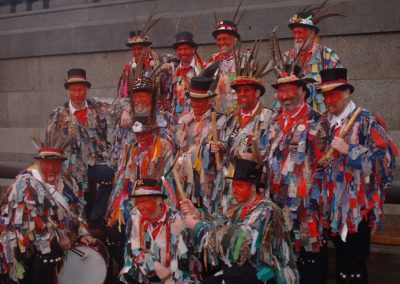 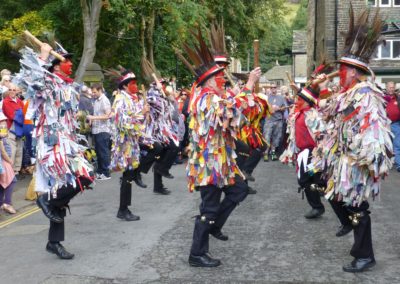 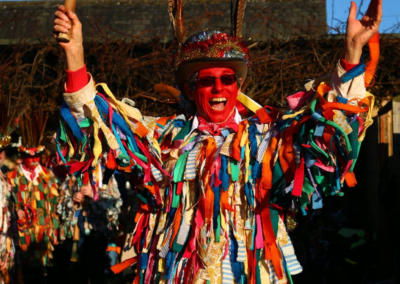 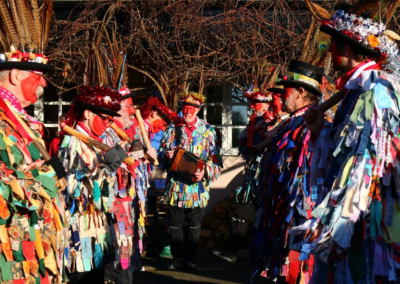 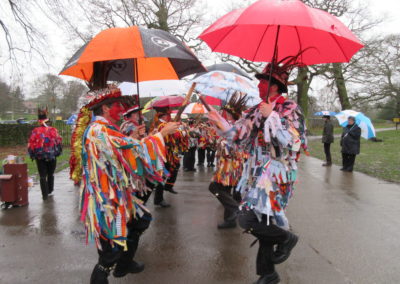 Bradgate Park in the rain.

Leicester Morris is now one of the established Morris sides in England, and have been members of the Morris Ring since the early 1960s.  For more than forty years we have annually performed at between fifty and sixty venues (we claim to have danced in every town and village in Leicestershire!) in our published programme of ‘tours’ as well as various fates and similar events. We hope to give as much pleasure to audiences as we derive ourselves from keeping the Morris alive. 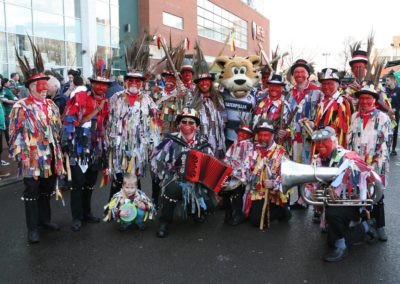 Now, in the winter Leicester Morrismen metamorphose into Red Leicester. The white summer kit changes to black trousers and a tattered rag coat. The straw hat bedecked with flowers becomes a black top hat or bowler decorated with ribbon and pheasant feathers. The large bell pads become one single string of bells and the Morrismen’s faces are painted red!

In Border Morris the tradition is to black ones face. However, Leicester paint their faces red for two reasons. In keeping with the famous cheese Red Leicester and also because Leicestershire is a sheep county. During the mating time red raddle is put on the ram’s belly and eventually it appears on the ewes’ backs. In this apparel the Leicester Morris become Red Leicester!